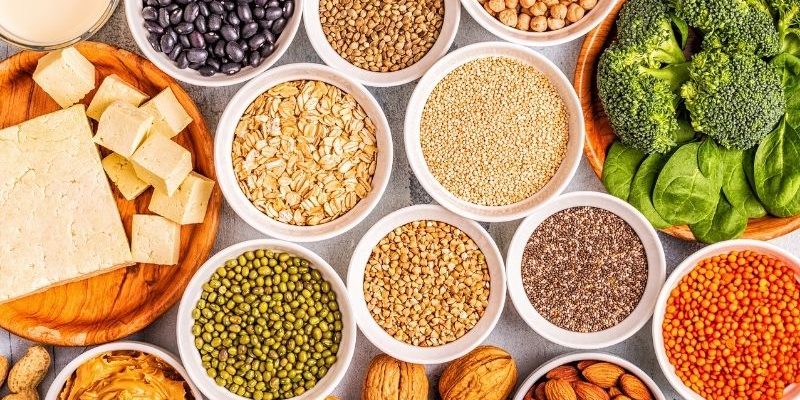 Before diving into some of the top vegan proteins, it’s important to get a few misconceptions out of the way. Because it is absolutely possible to get 100% of your protein from plants.

One big myth about eating a vegan diet is that it’s hard to locate vegan protein sources once you’ve stopped eating animal products. It’s true that many people, especially health and fitness buffs, have made protein a dietary obsession. But if you’re considering a vegan diet or at least reducing your animal protein intake, you needn’t worry about getting sufficient protein from plants. In fact, every edible plant you can think of contains protein.

Actually, you have more choices for vegan protein sources than non-vegan protein sources. Consider: the world contains tens of 1000s of plants that are edible. Each plant contains the three macronutrients – fat, carbohydrates and, yes, protein. As a Los Angeles health coach, I assure clients they have thousands of ways to get enough protein while on a vegan diet.

What is the right amount of protein?

Top Sources of Plant Based Proteins

Pumpkins are chock full of white seeds. When you shell them, you’ll find green pumpkin seeds inside, often called “pepitas”. Toast them in a frying pan and combine them with nuts, raisins, and granola in cereals or snacks, or substitute them for nuts in baked goods. Gram for gram, pepitas rank among the highest vegan protein sources. Half a cup of pepitas contains more than 30 grams of protein.

One ounce of pumpkin seeds equals about two tablespoons, which is easy to eat as a snack between meals. Use this vegan protein source to garnish savory and sweet meals. Top cereals and salads with them or blend the raw seeds into smoothies.

As a personal health coach, LA, I advise you to buy pumpkin seeds raw, shelled, and unsalted. One ounce of raw, shelled pepitas contains nine grams of vegan protein.

Other vegan protein sources require that you eat a full cup per serving, but hemp hearts pack a ton of protein in tiny portions. Simply sprinkle two or more tablespoons of hemp hearts over your salad or smoothie bowl. Use hemp hearts to make creamy sauces and dressings. Nutty-flavored hemp hearts are delicious eaten raw by the spoonful.

Lentils are legumes – cousins to foods like peas, peanuts, and beans. They come in a variety of sizes and colors, such as brown, red, and green. They’re extremely affordable and can undergo storage for a long time without needing refrigeration, two benefits that make lentils a diet staple of many world cultures. Popular in Indian cuisine, the humble, versatile lentil is frequently a vegan dieter’s go-to protein source.

One cup of cooked lentils contains a massive 18 grams of vegan protein.

The main ingredient in hummus, a thick and creamy spread, chickpeas (also known as garbanzo beans) are legumes that are naturally high in protein. Vegans favor chickpeas for their delicious, mild flavor and versatile texture.

Chickpeas are very inexpensive and easy to prepare. You can find them canned on the grocery store shelf or packaged dried. You can batch cook dried chickpeas in a pressure cooker or on the stove.

A single cup of cooked chickpeas provides about 15 grams of vegan protein.

If you have been seeking a new way to perk up vegan meals, tempeh is a plant-based protein that’s made from fermented soybeans. The fermentation process helps to break the phytic acid in soybeans down, rendering tempeh’s starch easier to digest. The soybeans are cooked, hulled, and fermented with a yeast starter. After fermenting, the soybeans get compressed into a patty, somewhat like a firm veggie burger, that can be crumbled, cubed, or sliced.

You can add tempeh to stir-fry in place of tofu. To replace ground beef in a recipe, crumble it up and add it to meatless chili or soup.

A one-cup serving of tempeh contains a whopping 34 grams of protein.

In my role as nutrition coach, Los Angeles clients often ask me whether a vegan diet can provide enough protein. I say, “yes!” And there are other advantages to eating a plant-based diet. As well as giving you the building blocks to create healthy muscle and tissue, plant-based protein can be beneficial for weight loss. Plant protein tends to be lower in fat and calories than animal protein, but it is higher in essential nutrients and fiber, making you feel full longer. By trading out plant-based protein for animal protein, you can lower your calorie intake and give a boost to your daily nutrient profile. While it’s true that you should consume a wide variety of plant protein to get all the essential amino acids, it’s also the most prudent way to make sure you get in all of the minerals, vitamins, and various nutrients you need.

All Proteins are NOT Created Equal– The Definitive Guide